Sometimes I hear the complaints of monotonous elements of the worship service, and a desire to shake it up and change. But often people don’t have much of an idea about the background of what happens in church. If adults don’t know, they can’t explain it to the youth either, and church becomes an empty routine… It will not be explained to guests either… how does that look…?

For example. In our Reformed church, the worship service has an opening and closing, for which we stand. It is not always clear what is happening at that time. Why does the minister raise one or two hands? Should we look up or down, can we put our songbook away, or take our coat and keys already? Why do some people close their eyes…? 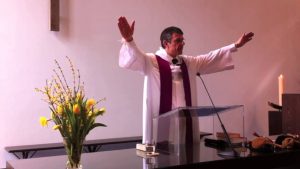 Our worship service opens with the congregation reciting the words of Psalm 124: 8. This “votum” is followed by a greeting (‘salutation’ in the Book of Praise) Sometimes also called the ‘Apostolic greeting’ (1 Cor 1:3). Now, in life, when people greet each other, they look at one another. So also in church: the minister raises just one hand (often held close to the body) and looks at the congregation. As congregation we look at the minister.

At the end of the worship service the congregation receives the blessing (‘benediction’ in the Book of Praise). The commonly used blessing is from Numbers 6: 24-26, following the practice started by Martin Luther (explaining a NT Trinitarian structure in this OT blessing). During the blessing the minister raises both hands, which reminds us of the blessing by the risen Christ when he ascended to heaven “he lifted up his hands and blessed them” (Luke 24:50).

There is significance to everything that happens in the church service. When attending regularly, we should know the background of these things. And we should also explain these things to the youth and guests…!