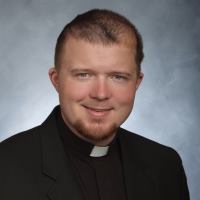 1. A controversy in a Catholic church in Michigan created a stir earlier this month. The approach of Rev. Edwin C. Dwyer (photo) to bring back the youth in church, was met with joy and hope by younger members of the congregation, but some of the elderly members complained. Stressing the importance of young people for the future of the church, Rev. Dwyer said that he wanted to do whatever worked to “embolden” younger Catholics and attract young non-Catholics to the faith. “Believe it or not, tradition works,” he said.

“So-called ’old ways’ are quite popular among younger Catholics. Classic songs, chant, prolonged silence, and, hold on for this one, Latin are all largely embraced by the younger generations of the church,” he continued. “Furthermore, when younger non-Catholics experience these traditions they are struck by how different they are from everything else they experience in a noisy, secular culture. These ‘old ways’ are beautiful to them, and beauty is a great place to introduce young folks to Jesus Christ.”
— 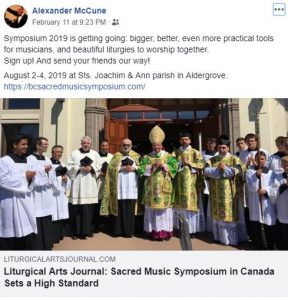 2. This year, Aldergrove BC will host again a symposium about Catholic church music and liturgy. The launch of the symposium last year (photo) drew large crowds from both the US and Canada. The symposium was founded in part on a belief that classical liturgical music can appeal to younger audiences. The highest number of participants were the under-40s.

“This phenomenon is on par with research that shows a clear indication of new listening trends in North America. Some studies show almost half (45%) of young people see classical music as an escape from the noise of modern life. Young participants cited a desire for the sacred, a refuge from the world of noise and static music, seeking worship music that “makes your heart soar”, proving even the oldest of sacred music repertoire still has something meaningful to offer.”

(These statements about young people are backed up by researchers.)
—

3. Are our Canadian Reformed churches also hearing what young people are saying? Or are we putting words in their mouth…? In our churches are desires to add more hymns for the sake of outreach and unilateral ‘unity’. Arguments include that this is “what lives in the churches” (indicating an internal preoccupation?). Some churches have introduced Christian Contemporary Music, which also “lives in the churches”…

However, Reformed traditional church music has something meaningful to offer as well! Just like the Catholics value and appreciate their church music and liturgy, the Canadian Reformed churches need to start doing the same! The next generation needs Reformed worship music that “makes their heart soar”, and it doesn’t look like more hymns and CCM are going to do that… (Other Reformed church federations have proven that point already.)