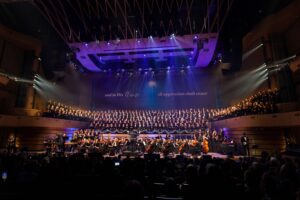 Have you ever realized that God that created music, but not as a physical object? Music does not have a shape, colour, smell or taste. Music does not exist until it is made. When the music ends, it ceases to exist.

However, play one note on a piano and it fills everything we hear. The tone is not in a particular location: it fills our entire oral space. When we add a note, both tones fill our entire oral space, and yet they are distinct. The tones resonate and enhance each other, and the pitch difference adds another dimension: all at the same time and in the same space.

Perhaps a triad (three notes at the same time) might illustrate the Trinity: it is one chord, but it has three different tones that resonate and enhance each other, while the sound is not confined to a space but fills everything…