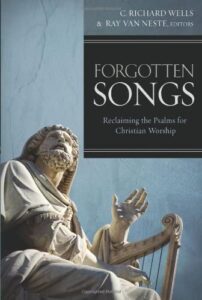 The Israelites sang Psalms. For example, when going up to Jerusalem, they sang the Psalms of Ascent (120-134). And Jesus and his disciples sang “a hymn” at their last Passover celebration: Psalm 118. The early church continued singing of the Psalms. And then the Reformation restores Psalm singing by the congregation after a long interruption.

During the Reformation, Psalm singing spreads quickly through Europe and even to North America. The first book ever printed on North American soil (1640) was a Psalm book – singing Psalms was a priority for the Pilgrims. However, today most North American churches don’t sing Psalms anymore.

During the 3rd Great Awakening in America, Dutch immigrants reestablished Psalm singing in the Christian Reformed Churches (CRC). However, after roughly 80 years the church members wanted changes to become more “North American”. Today, singing Psalms is the responsibility of the local church, and subsequently, Psalm singing has virtually disappeared in the CRC.

In the middle of the last century, the Canadian Reformed Churches (CanRC) appeared, reintroducing Psalm singing. They published their Book of Praise with 150 Psalms and a smaller number of hymns. Generally, the CanRC sing more Psalms than hymns, although there are calls for more hymns and changes considering the “North American context” of the churches. As the CanRC reach their 80th anniversary in the next decade, these discussions are worthwhile following.

The majority of North American churches don’t sing many Psalms – so, what is the big deal? The publisher of the book “Forgotten Songs” says this:

“For some, the thought of praying or singing the Psalms is entirely foreign. In this, we are out of step with our ancestors in the faith; we are an oddity in the history of the church and duly suffer for it.”

Likewise, Psalm-singing churches might be an oddity in North America today, but Psalm singing unites with the church of all ages.

Yet, the primary reason to sing the Psalms should be because they sustain us spiritually.

“The Psalms are the manna of the church,”

Do the Psalms nurture us spiritually throughout life’s wilderness, expressing the full range of human hope, despair, confession, praise, and yearning for the living God? (Augustine, Calvin) If they do, Psalm singing has something to offer in the 21st century.